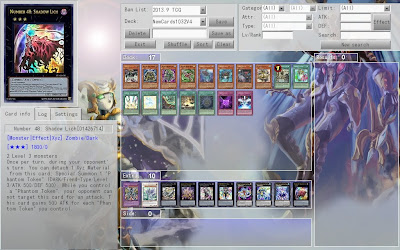 Changes in this version

Changes to the ygopro client

Changes to the card database

Changes to the AI

Special thanks to:
The donators

An option to have random battle music to play for each duel world be nice, like

You could have up to 3 different battle songs to alternate between duels.

D.D. Sprite does not return the banished monster back to the field on the next standby phase.

The monster banished with this effect must be returned to the during the next standby phase.

Please, someone, correct me if I am wrong with what I have just said.

BLS EotB is a semi nomi.. Please look it up thank you.

Percy if its possible can you please add some of the Blackwing Manga cards? Thanks :)

Double-fin shark seems to have a bug where it wouldn't go off after Shark fortress, with the materials double fin shark and a saber shark, both changed to 5 through it's effect, was compulsory'd back to the extra deck. I couldn't activate his effect, I'm guessing it's because Saber shark and Double fin were switched to level 5, and for some reason kept that property after going to the graveyard but I'm not sure.

so how can you duel in the anime mode. please give clear instructions to answer the question. I want to be able to duel other people using the anime mode

Kycoo the ghost destroyer has another effect which is not working. It prevents the opponent from removing cards from either player's graveyard. Be it special summon from grave or banishing monsters from graveyard. Just to highlight that this effect only affects the opponent.

First of all a special thanks to percy fot doing this for free God bless you man...Anyway,i have version 1.031 v4...where is version 1.032 v4? I don not want to download the whole thing again...i just want to update...can someone give me the link maybe...thanks??

i watched the replay D.D first impression, and i think its me.
did you know "THE_SOUL"?

why abys sphere + mermail abislinde effect negate , that monster can be special summon 1 monster "mermail"from deck ? its bug or not.

could you add number 101 and c101 and also add rank up magic the seventh one to ygopro?

yes,when is the next upgrade?

hi percy :)
can you add cards in ygopro? i'm sure you know that exist a lot of cards in the anime world that aren't in ygopro.
i wanted to ask you if you could add some cards of this list:
-Aggiba, the Malevolent Sh'nn S'yo
-Armament of the Lethal Lords
-Chimaera, the Master of Beasts
-Emperor of Lightning
-Grizzly, the Red Star Beast
-King Landia the Goldfang
-King of Destruction - Xexex
-Lorelei, the Symphonic Arsenal
-Meteo the Matchless
-Queen Nereia the Silvercrown
-Queen of Fate - Eternia
-Skuna, the Leonine Rakan
-Stardust Divinity
-Testament of the Arcane Lords
-Tyr, the Vanquishing Warlord
-Ulevo
-Ice Knight
-Thunder Knight
i know those two knights sucks but i'd like to see them in a game :)
oh and if you can do something please put better definition card pictures.
thank you percy. i hope you'll answer me soon.

The Mac version has problem when i start duel the game crash.

I also wanted to devil's strings :-(
However, a suggestion, if you are going to add the card number of the manga you can try to make them in color as mysterious winged dragon black feather? Thank you.

Thanks 3ygopro players. I am about to comment these, since they're missing (also some Tag Force exclusive cards). This is few cards less to comment.

There are 3 "bugs" i think i have found.

-The new lightsworn synchro can target and banish backrow cards (spell and trap). It says on the card text it should only target monsters?

-Using Silent Honours ARk Knight (and it's rank up variant)'s effect on xyz monsters causes the materials of the xyz monster to remain on the field, causing the game to freeze.

If you read this, Thank you. I hope my rulings are not incorrect. If you don't respond, i understand

ah and the rest of match winner :-)

Yep. Everyone noticed all the missing Match Winners...

i have always wished someone would create a game like this.

ah e the trap card card of the last will...
thanks

The Mecha Phantom Beast Blackfalcon (only seen once) does not summon a token when it declares an attack.

Also, Ghostrick Catgirl (sometimes, if not always) does not activate it's effect if the opponent has summoned a monster, even if you control another ghostrick monster. (Happened two occassions only.)

Ghostrick Roleswitch does not work either. It does not let me activate it's effect, not even a prompt.

If others had not experienced this error, please comment on here, so that it will be much clarified since these card bugs that I experienced have been experienced once or twice only.

Ghostrick ROleswitch does not really work though on my part.

"is not a valid Win32 application"

Having an issue with Sinister Yorishiro and Archfiend Emperor. Yorishiro lets me Normal Summon Emperor without Tribute, but Emperor has its own no-Tribute-needed condition for Normal Summoning. Both choices I am given state "Normal Summon without Tribute" without a way to tell which effect is being used, but no matter which of the two I choose, it defaults to Emperor's effect which causes me to lose half my ATK and the Emperor dies at the end of the turn.

Is there a way to have the game specify in the next update which effect is which so I can properly use Yorishiro to summon Emperor without drawback?

Thanks for reading and for making this awesome program!

Guys, please try this website, I'm not sure if Percy still reads these.
Go to the comments of the latest update: http://www.ygopro.co/News.aspx

With the new "Artifacts" spell, Artifact Movement, when I go and set 5 cards down I can't activate it, even during my opponents turn.

In matter of fact, anytime I set 5 cards with any Quick-Play cards set, I can't activate them unless the number of cards set are 4 or less.

Is this an error or glitch? Can you or anybody explain this?

Thank you for your response, Percy.
I do now understand Black Luster Soldier - Envoy of the Beginning's case in my last comment.

XYZ number C107 Neo Galaxy-eyes Dragon Tachyon is buggy when it is taxed the same two monsters do not attack three times!!1