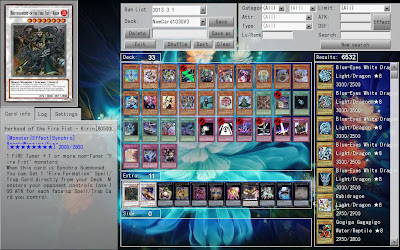 Everything you need to know can be found in the release notes:
http://www.ygopro.co/YGOPRO10300V3WorldofProphecy.aspx


Download the update here:
http://www.ygopro.co/Download.aspx
Posted by Percival18 at 11:10 AM

percy, why my fire king card skin is blank?

percy, why take out some anime cards? just checked my yugi moto deck to see that silent swordsman lv0 is no there same with the anime version of the seal of orichalcos. i think it would be nice to have both real and anime cards to add mor variety to creating character decks to test and duel against.

is JOTL cards not complete yet???
because I can'yt find this following cards...

Kazuura the Fascinating Fiend is a Plant type whilst on YGOPRO it is stated as an Insect.

Fascinating Trap Hole has not been added yet. Would appreciate to see it on YGOPro.

PLEASE, SLIFER AND OBELISK FROM ANIME !!!

view card problem!
i cant see the card on the top left side?
pls help me@

Thank you, this is an awesome game !

Please, fix it in the next rev.

The Automatic updating was taking to long to finish (over half an hour) so I canceled it and downloaded the update manually. Please look into this.

Please help...
I cant type anything in the whole .exe .. whenever I type something in chat or in card search it comes as blank spaces...
Im using windows 8... please help...

fix this plz.
Kazuura the Fascinating Fiend is plant-type card not insect-type card.

Forbidden Dress only prevents targeting, it does no negate.

You monster was already targeted so chaining forbidden dress to it is useless. You would have to activate it in advance.

Percival, Number C104: Masquerade Magician - Umbral's effect is not activating (the one that negate's the opponent's monsters' effect) please fix it for the next update and thank you.

I released an update today.

The background image has nothing to do with it.

Hey Percy, do you think you can create an system to play Cardfight!! Vanguard, like YGOPRO?

Instant Fusion isnt activating, anyone else having this issue?

Hey Percy, I just had a system-wide suggestion for the next update:

Is it possible to have the program start alerting or letting players know when their card effects miss the timing?

I think it would be a very helpful resource.


Also, is there any way this program can compare 2 player's decks at the start of a duel in similar fashion to Checkmate's server? Personally I think players shouldn't be prorated, but rather the deck that is about to be used. I want to know how strong a deck is, not the player using it.

Hey Percy, can you tell me why did mine became like this? http://puu.sh/2Az22
Everytime I clik on any option, it will crashes.
Thanks before.

Flying "C" is not working properly. My opponent can XYZ summon, and when he summons a monster, after I activate Flying "C"'s effect and Special Summon him, if I have another Flying "C" in my hand it allows me to activate his effect in a response as a chain, I'm not sure if I can do that. Please fix, thank you.

some times in the linux server a win in a tag duel was a lose in the profile at the site http://ygopro.cyberplanet.it/ hope this can be fixed thanks

But maybe that's just me.

can you add a limit for both tcg/ocg, right now i can only choose one of those

It has been updated to V4 in the meantime.

Why is umbral soul not affected by umbral unform effect

We seriously need to get the current artworks for a lot of these cards. It's just embarrassing at this point.

Pretty much the entire mecha phantom beasts are blurred.

percival18
playing at yugioh pro, i noticed a bug on the Point purchase card, the situation is: i draw point purchase and 3 other non-monsters card (aka 3 spells), but at this moment i simply cant activate it, because the game dont let me do it,
could you fix that problem? i want to improve my deck destruction deck with it, thanks

Percy, there is a bug with "War God end" , I can tribute Yamato and special summon him again which is impossible since it can only special summon war god with different name.
And another bug is "Noble Arms" Galatin and Arf...something I can't remember its name the modified attack point return to normal when they left the field which is not suppose to happen and Noble Arms are not mandatory eff so if monster is used for XYZ summon their effect can't be activated.

Oh another bug is sometime I can't activate remove spell counter from magical citadel of Endymion when I activate magical library eff please fix it, thanks.

You need to fix Soaring "C".

I'm sorry, but you released the silver dragon and still I couldn't find Blue-Eyed Maiden... is it still waiting to be released or what?

percy I have a question, how come you did not add these cards?

the match winner can't be used in duels....

All fusion summon not counted as special summon.

Because of this, Steelswarm Roach unable to active its effect, also Djinn Releaser of Ritual effect also couldn't stop the fusion summoning.

Anyone experience it too?

i found a Bug card
http://yugioh.wikia.com/wiki/Yellow_Duston

I get it.
But I would insist, however, victory dragon was added, and that too is a match winner not to mention the game yu-gi-oh tag force 6.....

3.Meklord Emperor Skiel/Wisel/Granel - is the name of the single card emperor with the
whole body with no infinity sign the same name as with the head only? Because it says
you can only control 1 on the field. (I have the single body on the field and I cant
summon the head part only).

NOTE: meklord emperor is the single card (the one that summons when a monster is
destroyed) and machine emperor is the head part only but you named it meklord
for both so when meklord is on the field you cant summon "machine emperor" bec. it
has the same name and there can only be one faceup meklord.

1. Chaos Blast - Targets only level 4 and below monsters not rank 11 and below xyz monsters .

2. Orichalcos Tritos - at the start of activation you can special summon from the
the extra deck once per duel which should not supposed to be.

Trion the Fascinating Fiend - if special summoned by goblindbergh
doesn't activate "destroy 1 spell/trap on opponents side".

Percy you forgot to resize these pics:

Can you add this cards from tagforce:

Using Rank-up Barians Force on Comic Hero, King Arthur CRASHES the game and can you fix
his effect, instead of once per turn, [once his atk is change he can always activate his effect as
long as he has an overlay].

yeah, I love the last update :D I run an tcg deck & im testing it with the new tachyon dragon to se if I really need it and it works like a charm. but I have a request, I run a hieratic deck and I read the tcg rulings & they say I can special summon a hieratic by tributing a hieratic, I have read all the cards and the ones that say that are su,nebthet,banishment and seal of reflection. the thing is that they don't say that the offering has to be faceup on the field nor face down. so the jist of ist is that the tribute can be face down or on your hand. it also works for the traps cuz you can ofer a hieratic to activate the trap. so u can have one on your hand or face down on the field to tribute it to activate the traps. example: its like having a deck full of ritual monsters without the need of a spell to special summon them and the tributed hieratic can be from your hand faceup or face down as long as it is a hieratic monster. their effect is ledgit I will leave you the tcg rulings so you can se for your selves. please fix this I need to practice more tcg sorry to bother u guy & hope this helps :) http://yugioh.wikia.com/wiki/Hieratic

tcg rulings> there is an error on neo galaxy eyes photon dragon that if I use the galaxy eyes photon dragon as an xyz material activates the first effect but when I use it here it wont work and hieratic sun overloard of Heliopolis's effect lets me chose how many I want to tribute and in here it obligates me to tribute everything without choosing a specific number plese fix this
page for galaxy eyes wiki http://yugioh.wikia.com/wiki/Card_Rulings:Neo_Galaxy-Eyes_Photon_Dragon

Anonimus
perhaps it would be recommended if percy add a rank-up magic Barian Force's anime version, because it does not require monsters of the same type, only increased by one rank

Hi guys...I think there is a bug with "Inferno rekless summon".
I used Goblindbergh's effect in order to special summon "Heroic Challenger - Extra Sword" from hand.
The opponent had a monster on the field and since the atk of "Extra Sword" is 1000, I should be able to activate the card and summon the other two from the deck. Can you eventually fix it please?

yeah instead of releasing new cards pls fix
1st all this bugs..dont you have a team or are you working alone?

that because in the script folder there is no earthbound scripts....

It would have been nice if, instead of just removing Flying "C", you actually fucking fixed it.

Flying c is not removed rofl! What a fucker

Why haven't the card pictures of the cards from Cosmo Blazer, Lord of the Tachyon Galaxy, and some others been updated yet? They are really low-quality and still use their OCG names instead of their TCG names.