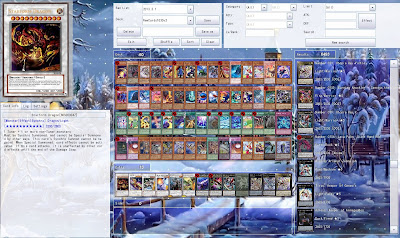 As always the ygopro program should update automatically. If it doesn't work for you then download the manual update from the download page.

War God - Yamato is bugged. His effect should only activate during the End Phase.

And if you accept my idea can you add a monsters with kaiser sea horse effect.

Already adding Number 66 would be WAY to premature.. sorry

Fluorohydride is still in charge of this project or are you doing all by yourself Percy??

Percy the effect of card "War God -Yamato" is wrong, the effect is active in the End Phase. please take a look ok :)

Thanks for the up-date.

For some reason, Madolche cards from "abyss rising" are back at being treated as OCG.

Thanks for the update Percy, the font and the colors are perfect in Duel Online. : D
Waiting anxiously for the update that will bring the new Starter Deck 2013!!!

Why I cant find mecha phantom beast harri-ard in the deck edit?

Perce when they will get the exe alternative?20

War God - Yamato is bugged, his effect doesn't activate during the End Phase :(

turbo duel is not working. speed world 2 must be manually activated now :(

why zen garden cannot be activate?

when they will get the exe alternative?

Malefic Paradox Dragon's Effect does not activate.
I played cards in this order:
Malefic World
Malefic Stardust Dragon
Malefic World
Burial From A different Dimension (Regular Stardust dragon is now in the graveyard)
Malefic Parallel Gear
Syncro summon Paradox Dragon with malefic blue eyes white dragon and parallel gear
Due to Malefic paradox dragon's card effect, it should allow me to special summon the regular Stardust Dragon from my graveyard.

@Malefic user:
Stardust wasnt properly summoned if u banish it from extra, so u cant SS it w/ Paradox.
Also, I agree that Yamato is bugged. There's no option to activate it during the End Phase.

because every time I tried to login, this notif always appeared????

ygopro_vs application does not open! :(

why many cards still in OCG to date?, when correct this?

Apparently the time limit loss doesn't work, because my opponent's time ran out and nothing happened. I hate people who stall and do this, and don't get punished for it, please fix it.

ei percy who program i need use to open cards.cdb

Hi Percy can you pls fix these card typos in pictures and card info,
it could lessen the confusion in searching for cards and it would be a big help thank you.
Heres a list of what I have seen:

Thanks Anonymous for the extensive list. I will take a look at the cards.

BUG Found...
Card = Red Dragon Ninja
Effect: When this card is Summoned: You can banish 1 "Ninja" or "Ninjitsu Art" card from your Graveyard to target 1 Set card your opponent controls; reveal that Set card, then return it to either the top or bottom of the Deck. Your opponent cannot activate the targeted card in response to this effect's activation. You can only use the effect of "Red Dragon Ninja" once per turn.

Bug Report: This card effect is not active in the next rounds.

Timelords cant be summoned without tribute..

I also found bug in here, plese ffix it in next version....

mogmole and big core aalso have a correct name in the card description:


mogmole and big core aalso have a correct name in the card description:

Some of what you said is true but if you compare the actual picture and the description below it not the one on the pic you'll know what I mean or maybe because i only update and havent full install.

the picture indeed have a wrong spelling, burt u can correct it by mmake your oown cards by editing deviantart cards with photoshoop tool....

How can I submit after I edited the Pictures to percy. Because It will Be A hassle everytime I update.

My anti-virus complains about adware when I open the update binary, will I have to re-download the whole program? :(

Please fix Trick Archfiend's effect. It is suppose to allow you to add any archfiend cards instead of just monsters.
http://yugioh.wikia.com/wiki/Trick_Archfiend

I found a bug. Attribute of Darkbishop Archfiend that is WATER is DARK.

You know what's the best part about this? No admins or moderators. And I'm not talking about just DN either, it's just as bad in things like TDOANE or DevPro.

With this? It's nothing but plain ol' straight-forward dueling. Don't like someone? Just leave and that's it. No dramas or kids trying to stroke their egos. Just plain and simple. Do kind of miss the other cards added into things like DevPro (miss my poor Numeron Force), but hey the wait's totally worth it when I don't have to dael with all the drama.

Thanks Percy for giving us a game that's just pure and simple, just as yugioh should be.

Just one note: in the picture, Dark Fairy Cheer Girl appears as a WIND monster instead of a DARK one.

not sure if this has been mentioned, but Umbral Will o' the Wisp's effect is not working... at all... its supposed to destroy the monster it battles with if it is destroyed by battle. Currently, it just dies.
Also it doesn't activate it's effect of level copying when summoned by Umbral Unform

Percy I have a suggestion why not add animation when a card is destroyed by battle and card effect
to differentiate it from just sending to the grave. If it aint possible It's no big deal but if yes it will feel like playing in anime.

I found a bug sometimes synchros have the Rank mark on field and and their level is based on rank and xyz have level mark and based on level [stardust R4, Utopia Lv8].

And swap button have a bug it messes the duelists names arrangement especially in tag.

Hey Percy, I think that the Archfiend Palace - The Labyrinth of Fiends have a error. The card says "Fiend-Type monsters YOU control gain 500 ATK." and it's boosting my oponents monsters too.

Thank you for the new version(and sorry for the bad english).

hi percy.. always cannot open the URL for multiplayer, what happened???
help me???

Great Shogun Shien's effect is not working. My opponent can use every time more than 1 spell/trap card.

I have been not playing your program lately, so I have to DL the latest version of your program.

The problem is that, I downloaded the full pack of the latest version: ygopro-1.030.0-V2-Percy-full

When I try to connect online, it will say to me "Failed to open URL"

WHat am I doing wrong? I even tried the fresh package without touching it: Still the same result.

Is this problem within my computer?

when I tried to open [vs-zone].lua timelords script is error

Hey Percy,
Any chance you'd be able to add Valon's Armor cards from the original anime? That's almost the only thing I can think of to request; your work thus far has been incredible!

Hi percy.
The lan mode its not working in hamachi its is a bug?

Errors are popping up with Swift Scarecrow and Necro Gardna's effects

Is there a way to download ygo pro for windows 8 users? I'm having problems getting it to work.

in the next version please add this following cards:

Yes, we would very much like if the other cards of Judgement of the Light would get added. We'd much rather play YGOPro than play TDOANE or DevPro where admins and moderators abuse their power.

Percival Hello, I would like you to help me in one thing, here in Brazil has plenty Duelists are just not very good in English, a guy once translated a version of the game but he never updated it, it only translated until version 1.02A.0, I have the file "cards" that version is not very perdir add what do you gave to be missing in this file can be in English even then the cards you add traduzilas I can, why this version ai has more than 5000 letters ai is easier to translate than 6600 letters, please break this twig al. The aquivo "cards" you get it here https://mega.co.nz/ #! BV9RGagB! PM5uFGzFbt84e2d_iQsI7CRutn42fX_MB64csq85mp0

Please, create the Destiny Draw (Tag Force System). And the Traditional Format. Thanks.

I dont know where to report bugs for anime cards, so here I go here:
Berserker Soul makes you lose instead of winning after finishing your deck (in Tag Force when you reach 0 cards in deck you stop drawing and win, but here you tried to keep on drawing and making "You Lose" because of "cannot draw anymore cards")

Again, thanks and keep up the good work XD

Ever since I updated I can't seem to play anymore. I can't even get to deck edit. The game just shuts down. I tried changing the system config but that didn't help. I even tried the alternate exe, but that one didn't work at all. Please help me so I can play again.


please fix it in next version